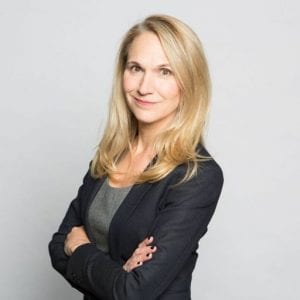 Over the years, I’ve noticed that very often the marketer have engineering or data science backgrounds. Mark Roberge is a quintessential example of an engineer that is also a brilliant Internet marketer. April Dunford is another.

April is focused on helping companies position their products in the marketplace. She uses the term “framing”, which she rightly points to as the key element in a product’s success or failure. You can find out about her workshops and speaking engagements by visiting www.rocketwatcher.com.

Why I selected April Dunford as Internet Marketer of the Week

Prior to last June, I had seen her name on speaking rosters and the occasional marketing forum, but that’s about it. Then, a few of us attended the Unbounce CTA ’17 conference, where she was a speaker. It was a great conference, with mostly good speakers, a few great ones, and a couple duds. April was one of the great ones.

First, she’s great at holding an audience, but more importantly, she understands product positioning and the sales process incredibly well. You can find that Unbounce presentation here: https://calltoactionconference.unbounce.com/speakers/2017-april-dunford/

To me, her underlying lesson is never to be held captive by our own assumptions. She tells the story of a database product she was charged with getting into the market. It’s a tough sell in a crowded space, so success was challenging at best. Eventually, after countless frustrating presentations, one feature resonated with the executive she was pitching. That one feature turned out to be a game-changer that none of her competitors had.

The company pivoted and repositioned itself as the leader in that specific financial vertical. Previously, she described an overnight mental self-revelation that the product was “crap.” In fact, the product was gold, but had been positioned where it had little chance for success.

If you get a chance to see April Dunford speak, don’t pass it up. She is brilliant, funny and a total pro, and you’ll likely learn a few things you can use to make your own company at least a little more competitive.